Buddhism and the Process of Creating Art

Introduction by Peter Shepherd
On May 2nd, 2010, I visited England, to attend the 30th anniversary celebration of the business I helped to set up back in 1980, First Light. Originally it was a photographic laboratory, specializing in hand-printed enlargements for mail order customers. Then we started the shop in the centre of the beautiful Lanes part of Brighton, and soon we gained a national reputation for our exhibition printing service. Meanwhile, I had trained as a psychotherapist and after 13 years with the business, I chose to follow that path, whilst Mark Nelson, my business partner, who is a wonderful photographer with a unique style - and an equally good musician - went on to make First Light a centre for multi-media productions (video, music and photography) alongside the Gallery. I couldn't wait to meet Mark again, my friend since schooldays, and many of the people I knew so well 30 years ago, who were attending.

Mark has always been very aware of the spiritual dimension of life. In our early teens, we'd talk for hours about the tree of life, past-life experiences, and what have you. He has developed a particular affinity for the Buddhist path and I think you'll be interested in his views. Over to Mark Nelson... 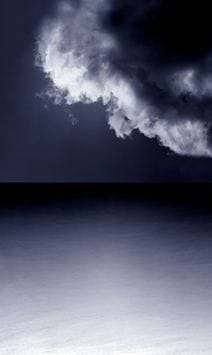 I have been a photographer/film maker, and have run the First Light photographic gallery in the heart of Brighton (in UK) for 30 years. I started the business in 1980 with Peter Shepherd of Trans4mind. Over the years we have exhibited and sold many images and have created pieces for the interior décor of British Airways' entire fleet of planes alongside making TV documentaries for the National Geographic Channel. But it's as a Buddhist that I have found one meaning of art, drawn from many hours of study, meditation and reflection.
"Art and Meditation are creative states of the human mind. Both are nourished by the same source, but it may seem that they are moving in different directions: art toward the realm of sense impressions, meditation toward the overcoming of forms and sense impressions. But the difference pertains only to accidentals, not to the essentials. Meditation does not mean pure abstraction or negation of form - except in its ultimate illimitable stages - it means the perfect concentration of mind and the elimination of all unessential features of the subject in question until we are fully conscious of it by experiencing reality in a particular aspect or from a particular angle of vision.

"Art proceeds in a similar way: while using the forms of the external world, it never tries to imitate nature but to reveal a higher reality by omitting all accidentals, thus raising the visible form to the value of a symbol, expressing a direct experience of life. The same experience may be gained by a process of meditation. But instead of creating a formal expression, it leaves a subjective expression, thus acting as a forming agent on the character or the consciousness of the meditator."

—Lama Govinda (1898-1985)
What is the purpose of art, and why do we, as artists, create it?
In the above quote Lama Govinda, who studied under some of the great Buddhist Masters in mid-20th century Tibet, believes that the 'job' of art is one of not just great value, but also one which does nothing short of expressing the true essence of life, without extraneous or distracting detail. How can this be achieved? For myself, in photography, I do tend toward minimalist composition and in music my taste is the same. The genius of pianist Keith Jarrett may come from the fact that he has claimed that he rarely plays any note at all, that is not an essential element to his improvised composition as a whole. Thus it is the space in-between notes, the elimination of lesser details in an image, the power of fewer words (that together shoot to the heart of a concept), that true art is achieved.

Indeed it is said, "The best art contains the whole world." When you see, read or hear work with that resonance, you know the meaning of that saying. From the complexity of a Mahler symphony to a simple but truly aesthetic Brian Eno sound and light sculpture, true art touches your 'soul' or in Buddhist terms, communicates with the real 'you' as a never born, never dying consciousness beyond time and space, allowing the universe to complete you, and beyond any judgement of form as 'art.' And perhaps that is why we have the instinctive urge to create it, to tune into true reality. 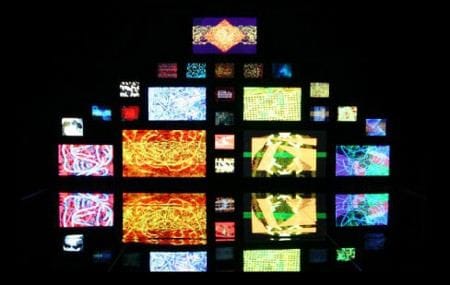 Brian Eno: '77 million paintings'
However, that said, do we really know if something is art or not? The answer of course is totally subjective and almost irrelevant. In meditation - a very good meditation where thoughts, like clouds have glided by, and you are deeply relaxed but alert - you can feel at one with the universe. You are in harmony with its manifold vibrations but strong and fearless with compassion, due to your deep empathy with the myriad of things. Thus a question like "is a certain painting art or not," could indeed seem less like a riddle and more like a joke. For example, when Magritte was challenged about why his painting of a pipe was not life-like, his response was that of course it wasn't a pipe, it was a painting of a pipe. It is form.

So an 'interpretation' capturing the essence of a person, place, feeling or the universe itself, stands alone as, for want of a better word, art. Indeed even the real thing - i.e. an actual person, place, feeling or the universe, for some people is also 'art,' completely separate to the former. How many people feel good just seeing a blue sky or a beautiful flower? In our so called 'conditioned world' all things complete you and all things can be seen as art, but it is down to the awareness of 'the viewer' to recreate the form in front of them and then judge it as being worthy of the label 'art,' if one wants to judge material things at all. Maybe we should just call it beauty. 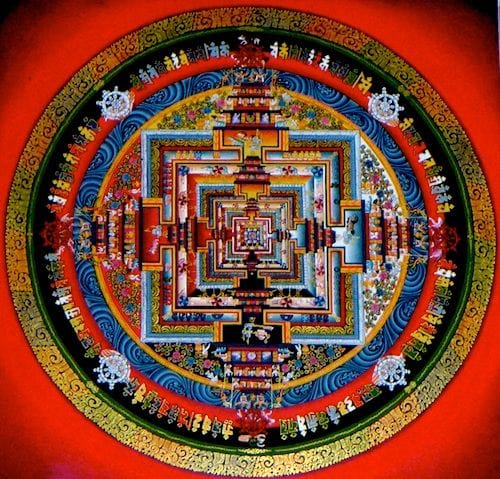 A Buddhist Mandala
In Buddhism the mandala stands alone as the outstanding symbol of the universe, time, space, Buddhas and Bodhisattvas. It is integral to the dharma. It represents the integration of human and divine realms, and is not only an artistic creation, but also a map to enlightenment. Even Carl Jung found a certain significance of the mandala in his work.

There are thousands of mandalas but the point is that art, in its truest most powerful form, can lead us albeit momentarily out of the mundane and into the sublime, where you meet your true self.

First Light have now mastered to high definition their film called 'Timeless Journeys, India: the Buddha's Path.' The DVD (52 minutes) is now available for purchase. The film is a 2-part documentary about a journey through India, from New Delhi to Bodhgaya, looking at the history and rise of Buddhism and its relevance to modern life.