It is my philosophy that we are blessed with the ability to think. It is therefore incumbent upon all of us to do just that. To begin we must ask the first question, “Who am I?” When we truly begin this self-examination process, we typically discover that who we think we are is actually based on how our society has defined us. Indeed, one of my favorite questions today goes like this, “What was your last truly original thought?”

When I ask this question I typically receive the same answer—silence. Why is that? The bottom line comes down to the simple fact that we have been largely programmed. Programmed to believe certain things, to think in certain ways, to behave according to acceptable standards, to obey, to conform and so forth. One of my favorite authors, Og Mandino, writing in the last century, puts it this way:

One of the painful prices we are paying for our so-called modern lifestyle in more alike. We all suffer through the same television shows, read the same magazines, wear the same fashions, and buy the same new frozen foods. We all live and die by the clock, cut each other off in similar looking automobiles, pass up a night at the ballgame for a night at the office, never seem to have much time for our spouses or kids, watch helplessly as our oceans and lakes are poisoned, and try not to think of a hydrogen bomb landing anywhere near our city or town.

We are all, as years pass, falling into step in order to march to the beat of the same drummer, racing forward or backward at the same pace as all others, smiling almost on command—mass-produced beings with no more individuality than any of the millions of saltine crackers that emerge daily from the ovens of Nabisco.

This description has only deepened in meaning in our 24-7 information age that tends all to often to be literally the age of propaganda; indeed, perhaps more aptly stated, the age of mediaocracy.

The answer to the question, “Who am I?” then takes on a different meaning when you realize the extent to which we have been programmed, and yet life itself calls upon us to accept the miracle that we are. Life is indeed a miracle and so are you!

I encourage you to become mindful and genuinely examine yourself, your ideas, your beliefs, and especially all of those self-imposed limitations that in most cases are false to fact. I believe that inside every human being is a vast resource that typically goes untapped—left wasted through neglect for no other reason than self-doubt. I believe in you!

I believe that the way we give back to the Giver of this miracle is by being all that we can be, by doing our best at everything we do and by recognizing the miracle in all life. It is from this perspective that I truly wish for you the dignity, bounty and blessings that are yours by birthright as part of the miracle.

Eldon Taylor has made a lifelong study of the human mind and has earned doctoral degrees in clinical psychology and pastoral psychology. He is the CEO of Progressive Awareness Research, an organization dedicated to researching techniques for accessing the immense powers of the mind, and is the author of the New York Times best seller, Choices and Illusions: How Did I Get Where I Am, and How Do I Get Where I Want to Be?. And now Eldon's has released this remarkable new book...

A Quantum Shift in Personal Growth 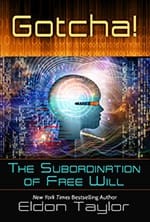 For more than a century, a silent battle has been raging for the territory of your mind. The weapons are so covert that the masses have remained unaware of their use. So effective are these tactics that even when the victims are told what is happening, and they make some show of being outraged, they nevertheless allow it to continue. Like a virulent virus, the effects are spreading, exerting a stronger control over a greater number of people on a daily basis—and we can only wish this was all just fiction!

Inner conflict is often the evidence that
you are not being true to yourself.

Gotcha! The Subordination of Free Will by Eldon Taylor explores the 24/7 bombardment of information designed to win the hearts and minds of the public. Eldon Taylor demonstrates how new sound-bytes are championed into personal awareness, becoming memes of the culture. All of this results in framing and reframing classical positions thereby causing adjustments to personal values and history itself. Your very decision process is being managed and manipulated, and the quest for discovering your real self becomes exponentially more difficult if not impossible as a result. You can never claim your ideas and beliefs as being solidly your own until you have examined the evidence presented in these pages.
I strongly urge you to get your copy NOW! Take back your power, take back your hearts and minds, and learn what it means to be truly free!
"Where 1984 reached into the future to tell a story of what would happen in the world, Gotcha! reaches into the past and explains how they did it without you knowing it. This is a great read that crosses all interest lines. If you care about this world, you owe it to yourself to read Gotcha!" ~ Richard D. Rowland