An Integrated Path to Bio-spiritual Transformation

Physicists have recently begun to acknowledge the existence of particles called tachyons, a powerful form of energy popularized by Star Trek. But tachyons are not science fiction. Tachyons are particle-waves belonging to the lepton family that, according to the evidence, fail to obey the law of gravity. In other words, they appear to travel faster than light.

Even normal quantum particles such as electrons have been shown to communicate "telepathically" with each other at a distance, as if connected at an aetheric level. Indeed, some members of the scientific community have gone so far as to resurrect the Greek term aether for the higher-dimensional-energy medium that is "empty" space. Although it is generally assumed in Western scientific circles that Einstein's theories automatically do away with the need for a unified energy field, in the 1920s Einstein actually affirmed the contrary, stating that "in theoretical physics, we cannot get along without" such a field—which, interestingly, he referred to as "ether." A variety of other scientific phrases, including "dark energy" and "quantum medium," have been employed in recent years to indicate the astounding energetic potential of what has for the past century been incorrectly perceived as nothingness.

Similar findings have been reached in biology. Molecular scientists have identified a striking phenomenon—zero point energy—by which biological organisms use measurably more energy than is possible for them to extract from their daily intake of food, water, and air. This phenomenon occurs when the distance between two non-charged surfaces, such as water and a cell membrane, becomes negligible, dimensional coherence ("lasing") occurs and, by most indications, multidimensional "torsion" energy (a phrase coined by Eli Cartan in 1913 to indicate the spiraling action of this energy) is drawn from the vacuum potential of the space matrix.

For those familiar with the officially acknowledged applications of Einstein's theories of Relativity, it should be easy to see how the mere existence of particles that move faster than light and/or communicate telepathically through an aetheric medium begins to unravel an entire paradigm for understanding the physical universe. On the subject of the "Crumbling of Certainty" in the wake of such logic-challenging discoveries in quantum physics, Charles Eisenstein in The Ascent of Humanity writes, "The whole idea of certainty of knowledge, built through objective reasoning, is only as sound as the objectivity at its basis. Question that, and we question the soundness of the entire edifice of experimentally-derived knowledge" on which our current sciences, and the worldview connected to them, depend.

Thus we find ourselves in the age of "subquantum" science, in which our greatest minds find themselves struggling to explain seemingly inexplicable phenomena having to do with apparently impossible, nonlocal events such as remote viewing and ESP—to cite two puzzling examples that can now be plausibly explained as intelligent movements of higher-dimensional torsion energy or universal creative consciousness. I propose that tachyons and related particle-waves are forms of non-gravitationally-bound or superluminal torsion energy emanating multidimensionally from our point of origin at the center of our galaxy.

The Vedics created an elaborate science spanning yoga, meditation and diet for pooling this higher-dimensional energy, which they termed "prana," into their bodies. The Taoists developed a similar science for cultivating "chi." Early in the 20th Century, Nikola Tesla theorized the existence of "scalar" waves (subsequently popularized by Tom Bearden) that transcend spatial limitations and are capable of acting instantaneously at a distance. Tesla created a prototype scalar system for free electricity using no generators or wires. Later, Wilhelm Reich became famous experimenting with "orgone" energy. Aether, prana, chi, scalar, orgone—all are names for the light-based aspect of the same spiritual or torsion energy that gave (and continues to give) rise to the holographic multiverse.

My research suggests that life as we know it depends on a double helix, structurally similar to DNA, of two differentiated, interfacing types of torsion energy: 1) higher-dimensional thought or intention manifesting as light; and 2) sound in higher-dimensional octaves which, like its counterpart, is measurable as a standing spiral wave capable of activating DNA, for example, with no time lapse across theoretically infinite distances.

To those wondering how such waves could contain sufficient information to (re)program DNA, it is worth remembering we live in a world crisscrossed with electromagnetic waves that carry highly complex television, telephone and radio signals that can be easily decoded with the right equipment. According to Richard Miller, a leading theoretician in the field of quantum bioholography, even more information can be holographically encoded than with simple electromagnetic encryption. For practical purposes, the DNA molecule is brilliantly designed as a holographic torsion-wave-decoding biocomputer—one that magnetizes creative energy to it, and thus to our consciousness, that is aligned with our beliefs.

What if, by introducing healing sounds and intentions to the genome, sounds and intentions that derive from the same unified torsion energy of Source that I propose is just a way of describing the energy of unconditional love, it is possible to key transposons in "junk" or potential DNA to rearrange themselves and "play" the energy body in a higher octave, one more in tune with the unlimited creative consciousness of nonlocalized mind? What if we can thus raise the harmonics of our system of electromagnetic fields and fully align ourselves with our Higher Selves? What if by raising our vibratory frequency from within, we can repattern our electromagnetic blueprint and seal the electromagnetic disruption in our subtle anatomy I call the Fragmentary Body, allowing us to transcend limiting dualistic patterns and elements related to these patterns—physical, mental, emotional, and spiritual?

Referencing the new Russian research in "wave-genetics," author and researcher David Wilcock writes that "these studies give extremely convincing evidence that the DNA molecule is directly affected by outside energy sources. If DNA is actually assembled by an outside source of energy, then when we increase the flow of that energy into the DNA, we can also expect that the health and vitality of the organism will increase." Wilcock concludes that we "are left with the strong impression that torsion waves are the single most important factor in an organism's health."

As cofounders of the Regenetics Method of DNA activation, my partner Leigh and I think of ourselves not as "practitioners" or "healers" but merely as facilitators for the individual's own bioenergetic unfoldment. We consider Potentiation Electromagnetic Repatterning the first step in a three-part "rebirth cycle" that continues with Articulation Bioenergy Enhancement and culminates in Elucidation Triune Activation. This process starts with a specific DNA activation that initiates a domino effect of electromagnetic repatterning that, like human gestation, takes just over nine months (42 weeks) to unfold.

Because there are two forms of higher-dimensional helical waves that interface with potential DNA, sound and light, Potentiation employs both. We use sound (produced vocally) and light (in the form of a non-specific healing intention) to produce what we call an "energized narrative." We contend that this conscious movement of torsion energy in the form of special vowel-based words is capable of stimulating transposons in the human genome, activating a reset program that lies dormant in potential DNA. This program (which we do not need to create because it already exists) starts a chain reaction in which torsion energy works its way down and up then down again through the various subtle bodies on a gestational timeline.

After five months, the electromagnetic fields and chakras recalibrate from nine to eight in number and the bioenergy vacuum constituted by the second field/chakra, the Fragmentary Body, seals itself. This occurs as the ninth and second fields/chakras fuse in what might be termed a sacred marriage of opposites. Sealing, I cannot overemphasize, is an indispensable step on the path to true healing, as it lays the groundwork for a higher energy body—and ultimately bio-spiritual enlightenment—by initiating the process of integrating the fragmentation of the Self caused by duality (which Wilcock calls the "Original Wound"). In a profound sense, we can say that sealing is required for healing or "wholing." 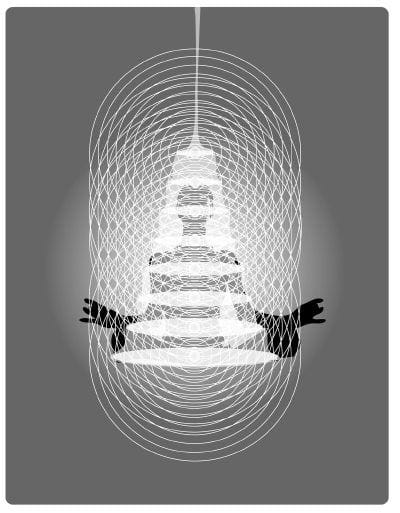 From Conscious Healing: Book One on the Regenetics Method: Energizing the Bioenergy Blueprint. The above image shows the flow of torsion energy or universal creative consciousness down through the electromagnetic fields that occurs during Potentiation Electromagnetic Repatterning. Utilizing the genetic sound-light translation mechanism detailed in Chapter Six, each sonic field, in turn, energizes the corresponding chakra with higher-dimensional light, which then transfers as bionergy or kundalini to specific aspects of the subtle anatomy. Copyright (c) 2007 by Sol Luckman and Kara Brown. All Rights Reserved.

Over the next four months, this new bioenergy blueprint begins to fill with Source energy from the top down much like a tiered fountain as shown in the figure above. The chakras slowly begin to open, becoming more powerful and efficient, as the electromagnetic fields gradually increase their harmonic resonance. At this point, "potentiators" often report a sense of integrating this new energy that can last up to an additional gestational cycle of nine months.

In terms of consciousness, Potentiation Electromagnetic Repatterning facilitates awareness of the true nature of the Self (which is divine) and the Cosmos (which is holographic, meaning the part not only reflects but contains the whole), empowering individual discernment to begin attracting higher "quantum outcomes" following the universal law that "consciousness creates." This productive use of awareness invites one to begin facing limiting thoughts, emotions and beliefs and by itself can lead to markedly increased vitality, more balanced interactions with one's environment (i.e., fewer allergic reactions), greater financial abundance, more loving relationships, even renewed life purpose.

Articulation Bioenergy Enhancement is appropriate as of the five-month mark of Potentiation, after the electromagnetic fields have recalibrated and sealing has occurred. At this point a new bioenergy blueprint (with no interruption or leakage in the form of the Fragmentary Body) is in place to utilize the potent life force Articulation stimulates. In Vedic teachings this life force is called kundalini. Leigh and I understand kundalini as the individual’s own torsion life-wave that, following "As above, so below," marries the micro- with the macrocosmic in the process of healing. Articulation gently "switches on" kundalini first at the genetic and cellular levels, providing a continuous bioenergy supply for creativity and personal transformation in many areas—including artistic expression, interpersonal communication, healthy sexuality, and rebuilding through diet and exercise.

Elucidation Triune Activation, the third and final phase of the Regenetics Method, is appropriate following Articulation as of the nine-month (42-week) mark of Potentiation. Elucidation stimulates a mostly dormant portion of the neocortex or triune brain, facilitating creation of a higher energy body. Elucidation also encourages "transcendence through immancence" by assisting the individual to replace limiting and/or harmful beliefs with life-affirming ones. This restructuring of the belief system, the most fundamental creational level of human subtle anatomy also known as the spiritual subtle body, can dramatically change one's experience of reality. The ultimate goal is the embodiment of a new awareness based no longer on duality and separation but on unity consciousness and unconditional love.

Copyright © 2007 by Sol Luckman. All Rights Reserved. Sol Luckman is author of the internationally acclaimed Conscious Healing: Book One on the Regenetics Method, editor of the popular free ezine DNA Monthly, and cofounder of the Phoenix Center for Regenetics. His articles on the Regenetics Method of DNA activation have appeared in Atlantis Rising, Well Being Journal, Renaissance, Odyssey, Sedona Journal of Emergence and Kindred Spirit, and also have been featured in the alternative medicine anthologies Message of Spirit: A Manual for Your Mind and Heal Yourself with Breath, Light, Sound and Water. In addition, he has been a featured guest of Dr. Stuart Titus on the Internet radio show "Health & Science: The Next Generation." Nexus New Times called Conscious Healing, which also received a five-star endorsement from the Midwest Book Review and was recently translated into Turkish, a "paradigm-reworking book" that introduces a "revolutionary healing science that's expanding the boundaries of being." For more information visit Center for Regenetics or call (302) 476-2333 and Skype: regenetics.